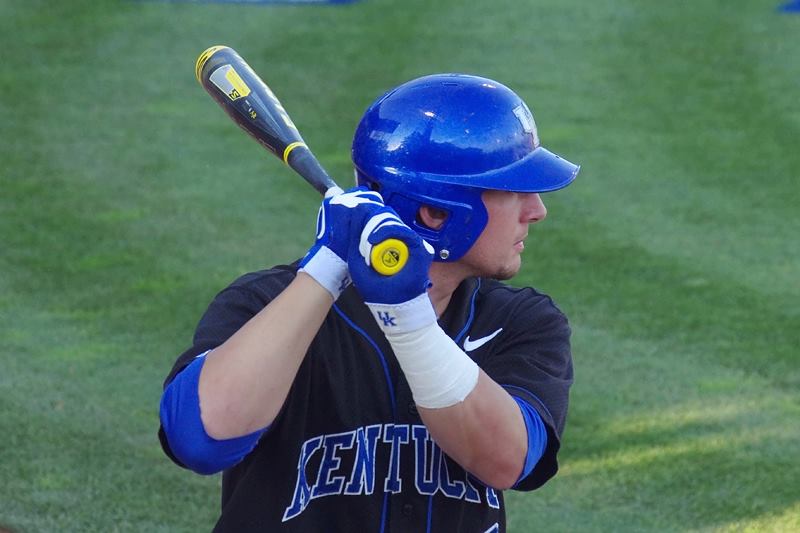 UK Junior LHP/1B Hits 21st Homer of Year, Improves to 9-2 on the Mound

LEXINGTON, Ky. — A.J. Reed hit his NCAA-leading 21st homer of the year and picked up his Southeastern Conference leading ninth win on the mound, leading Kentucky to a 6-3 series-opening win over Auburn, on Friday night at Cliff Hagan Stadium.

Kentucky (29-19, 11-14 SEC) rode another heroic effort from Reed to the series-opening win. Reed homered and picked up the win for the fourth time in 2014, also belting his sixth homer of the year in a game where he was the starting pitcher.

A native of Terre Haute, Ind., Reed improved to 9-2 with his SEC-leading ninth win of the year. He worked eight strong innings, allowing seven hits and three runs, walking two and striking out five. It marked Reed’s 10th quality start of the year in 13 assignments and the 19th of his career. Reed has worked seven or more innings in 10 games in 2014, lowering his season ERA to 2.30. On the year, Reed has a 9-2 record in 90 innings, allowing 80 hits and 25 walks, striking out 63.

UK got a three-hit game from Ka’ai Tom, who drove in UK’s two go-ahead runs in the seventh inning. UK also got a two-hit game from Austin Cousino, who was caught stealing for the first time in 16 attempts. UK got hits from all nine starters, with Max Kuhn, Thomas Bernal, Storm Wilson, Micheal Thomas, Matt Reida and JaVon Shelby each collecting knocks. Wilson extended his hitting streak to eight games with a single in the fourth inning.

After a rain delay of an hour and 17 minutes, UK finished off the bottom of the eighth inning before turning to Logan Salow in relief of Reed. A native of Ashland, Ky., Salow came on to face a left-handed hitter to start the ninth, issuing a walk, before UK turned to Spencer Jack. Jack worked the final three outs to pick up his third save of the year, working around a two-out single on a bloop single that saw the bat – and ball – fly into shallow leftfield.

Auburn (26-24, 9-16 SEC) senior Michael O’Neal earned the start as a last-minute replacement for scheduled starter Dillon Ortman, who leads the SEC in wins. O’Neal worked 1.2 innings, allowing three hits and one run, striking out one. Jay Wade took over with two outs in the bottom of the second inning, getting an out to escape the jam. Wade worked 1.1 innings, allowing just one walk. Lefty Daniel Koger started the fourth inning, walking one hitter, before Reid Carter took over. Carter worked three innings, allowing four hits and two runs. Auburn also used Terrance Dedrick (1-3), Rocky McCord and Trey Wingenter in relief.

The series will resume on Saturday at 7 p.m. ET at Cliff Hagan Stadium. The game will be televised on Fox Sports South and CWKYT, with Dick Gabriel, Doug Flynn and Brian Milam calling the action. The game will also be broadcast live on the UK IMG Radio Network, with the Voice of UK Baseball, Neil Price, calling the game. Fans in Central Kentucky can hear the game live on WLAP 630-AM, in Louisville on WKJK 1080-AM and online at UKathletics.com. UK will turn to junior righty Chandler Shepherd (5-2, 3.55 ERA) to face off with Auburn freshman righty Keegan Thompson (5-3, 1.91 ERA).

The Wildcats took a lead in the bottom of the second inning, as Bernal led off with a single through the left side, with Tom following with a single to left. After a popped up bunt attempt in foul ground and a pop up for the second out, Reida delivered a two-out RBI double to rightfield, scoring Bernal.

Auburn answered in the top of the fourth inning, as Damon Haecker led off with a single, poked through the right side. Blake Austin then drew a walk, with Auburn turning to pinch hitter Blake Logan in place of cleanup hitter Daniel Robert, with Logan drawing a walk to load the bases with no outs. Damek Tomscha then hung a 3-2 pitch into right-centerfield, allowing Haecker to score from third base.

The Tigers took the lead with some two-out hitting in the top of the sixth inning. After a pair of quick outs, Blake Logan singled to leftfield and Tomscha followed with a single to rightfield. Ryan Tella then pulled a high fly ball down the rightfield line, with the ball dropping against the base of the wall for a two-RBI double.

Reed answered in the bottom of the sixth inning, smashing a 3-1 pitch over the rightfield fence, towering over the 30-foot wall. It marked his NCAA-leading 21st homer of the year and his 13th in SEC play, with all 21 coming on the weekends.

The Wildcats rallied to take the lead in the bottom of the seventh inning, as Reida started the inning with a four-pitch walk, taking second on a sacrifice bunt. Cousino then put runners on the corners with a single through the right side, bringing up Kuhn. Kuhn singled through the right side, allowing Reida to score, with a misplay on the scoop allowing Cousino to motor home. Tom then smashed a two-strike, two-out single off the first-base bag, allowing Kuhn and Reed to score.