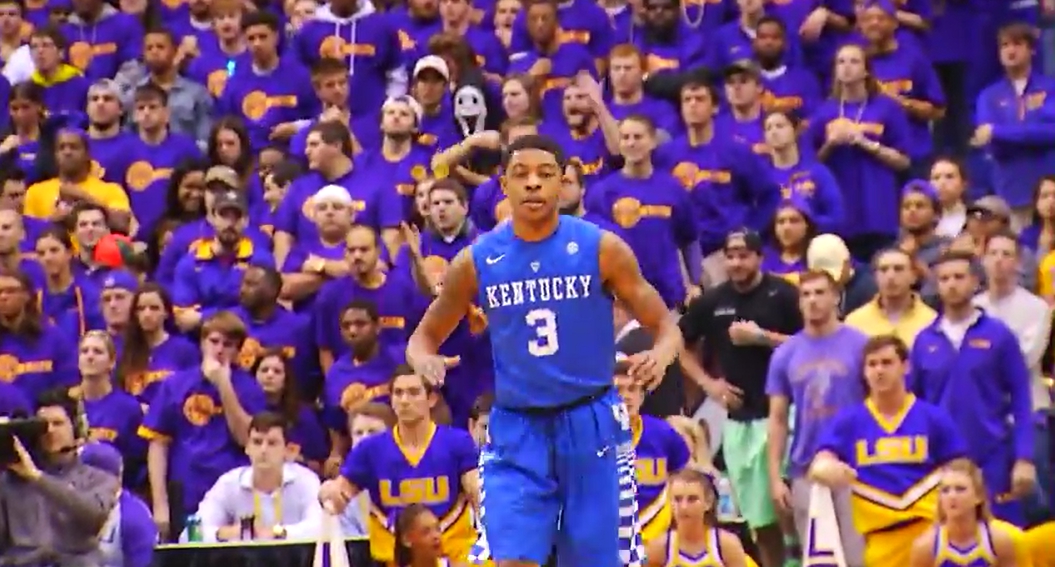 LOS ANGELES – The Kentucky men’s basketball team had three players on the preseason award watch list for the John R. Wooden Award for player of the year.

Sophomore Tyler Ulis and freshmen Skal Labissiere and Jamal Murray were three of the 50 players tabbed to the preseason list.

The Wooden Award was chosen by a preseason poll of national college basketball experts, the list is comprised of 50 student-athletes who are the early front-runners for college basketball’s most prestigious individual honor.

Ulis, who also starts the season on the Bob Cousy Award watch list as well as the Lute Olson Award watch list, appeared in 37 games during the 2014-15 season. The Chicago native led the Wildcats in assists in 20 contests while posting five or more dimes in 12 games. He did not commit a turnover in any of UK’s final four games of the season during the NCAA Tournament and concluded his freshman campaign ranked third in the country and first among league competition with a 3.6 assist-to-turnover ratio.

Labissiere joined Kentucky as one of the top prospects in the country. The consensus five-star recruit was ranked as the No. 1 overall player in his class by both Rivals and Scout. The Port-au-Prince, Haiti native poured in 11 points and 12 rebounds in 19 minutes of action in the Jordan Brand Classic to highlight his prep career.

Already named to the Kareem Abdul-Jabbar Award watch list, an award given annually by the Naismith Memorial Basketball Hall of Fame to the nation’s top center, Labissiere was named the Southeastern Conference Co-Freshman of the Week on Monday after exploding for a career-high 26 points in the win over NJIT.

Murray, a five-star point guard out of Kitchener, Ontario, was rated a top-15 prospect by nearly every major recruiting service before reclassifying to the 2015 class. The 6-4 freshman scored 30 points against the United States in the 2015 Nike Hoop Summit, where he was named the most valuable player. Later, he guided the Canadian National Team to a victory over the United States National Team with 22 points in the fourth quarter and overtime.

Murray led UK in scoring with 19 points and also dished out eight assists in UK’s season-opening win over Albany.

The players on the list are considered strong candidates for the 2016 John R. Wooden Award. The Wooden Award National Advisory Board will select 25 players to the Midseason Top 25 in early January. In early February, the John R. Wooden Award will announce one final leading candidate list—the Late Season Top 20—prior to the selection of 15 players to the National Ballot. Nearly 1,000 voters will rank order 10 of those 15 players, who have been qualified as meeting the standards set forth by Coach Wooden. Voting will open prior to the start of the NCAA Tournament and will allow voters to take into consideration performance during the early round games. The Wooden Award All American Team will be announced the week of the “Elite Eight” round of the NCAA Tournament. The winner of the John R. Wooden Award will be announced during the ESPN College Basketball Awards Show presented by Wendy’s on Friday, April 8, 2016.

Kentucky returns to the court on Tuesday in a matchup with No. 5 Duke at 7:30 p.m. ET. The game is set to air live on ESPN.