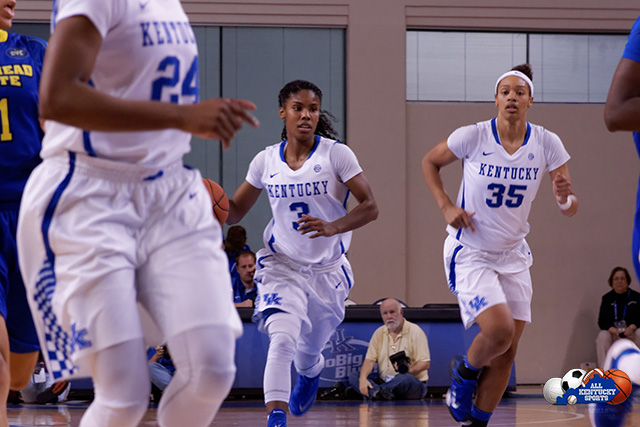 LEXINGTON, Ky. – The No. 8 University of Kentucky women’s basketball team continues its tough December stretch on Thursday as it welcomes in-state rival and preseason top-10 ranked Louisville to Rupp Arena for a 7 p.m. ET tip. The game is one of two contests this month for Kentucky in the historic downtown building.

Single-game tickets are available online through Ticketmaster at $9 for lower-level reserved seats and $8 for upper-level general admission. Senior citizen (65+) and youth (6-18) tickets are available for $5 while children age five and under will be admitted free (based on availability) in upper-level general admission. In lower-level reserved seating, all patrons require a ticket regardless of age. UK faculty and staff can receive up to four complimentary tickets for the game if purchased in advance at the Joe Craft Center Ticket Office with valid employee ID. Group tickets are also available in advance starting at $2 by contacting the UK Ticket Office.

The game will be televised nationally on SEC Network with Brenda VanLengen, Carolyn Peck and Steffi Sorensen calling the action. The game can also be seen through WatchESPN through computers, smartphones and tablets. For the 11th consecutive season Neil Price will have the call on the UK Sports Network. Fans in Lexington can hear Price’s call on 630AM WLAP.

More than 10,000 convenient parking spaces are available within a 10-minute walk of Rupp Arena. In addition, most surrounding parking lots and parking garages offer spaces for individuals with disabilities. A parking fee will be in effect for most all Rupp Arena events. A parking map is available here.

Kentucky (7-0) moved up several spots to No. 8 in both the Associated Press Top 25 and USA Today/Coaches Top 25 this week. It marks the first time this season the Wildcats have cracked the top 10 in both listings. The rankings extend Kentucky’s school-record rankings streak to 119 weeks. Louisville, which started the season ranked eighth in both polls, is receiving votes in the latest AP poll.

Kentucky will be hitting the hardwood on Thursday for the first time in over a week as the Wildcats last played on Wednesday, Dec. 2 when they traveled to NKU and defeated the Norse 84-65 at BB&T Arena. Senior guard Janee Thompson paced Kentucky with 21 points and seven assists, while junior forward Evelyn Akhator had 13 points and six rebounds and junior guard Makayla Epps had 16 points, seven rebounds and five assists in 39 minutes of play.

Louisville recently dropped out of the AP Top 25, having previously been ranked the No. 22 team in the nation on the Nov. 23 poll. UofL started the season ranked in the top 10 of both polls. The Cardinals are off to a 3-4 start to the season, with losses to No. 18/17 California, Western Kentucky, Purdue and Dayton, the latter three of which are all receiving votes in both the AP and USA Today Coaches polls. UofL is currently on a two-game winning streak with a victory over highly ranked Michigan State on the road and Valparaiso at home.

Louisville has four players averaging double-digit scoring, led by sophomore forward Mariya Moore with 15.4 points per game, who is also second on the team in assists, with 25, and steals, with 15. Myisha Hines-Allen has been leading the rebounding effort with 7.1 boards per contest to go with 13.1 ppg. Louisville is currently ranked No. 20 in the nation in steals per game (20.0), and is also averaging 16.4 assists per contest, good for 47th in the NCAA.

Thursday’s meeting will be the 52nd all-time contest between the two schools in women’s basketball with Kentucky leading the series 33-18, including a 21-4 mark in games played in Lexington. The series is tied 2-2 in games played in Rupp Arena. The Wildcats have won four straight games in the series, while Mitchell is 5-3 vs. UofL.