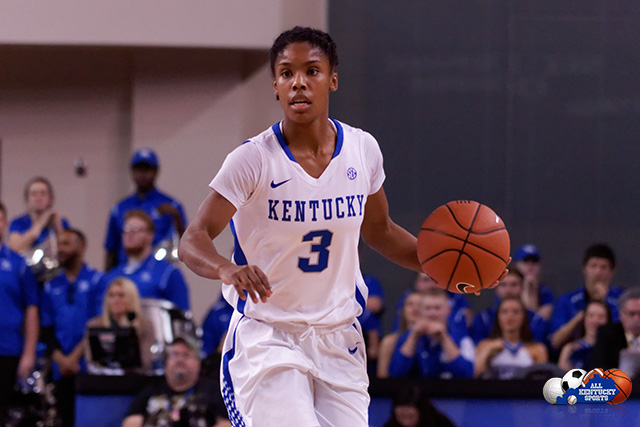 – The meeting was the 64th between the two programs, with UK advancing to 11-53 in the all-time series.

– The victory snaps a four-game losing skid against the Lady Vols.

– Matthew Mitchell is in his ninth season with Kentucky and the win moves him to 239-113 overall, including a 209-84 record while at Kentucky.

– Attendance at Memorial was 6,188, the highest in Memorial this year.

– UK committed just 10 turnovers, a season low for the 2015-16 season and the fewest in an SEC game since UK gave up just nine turnovers against South Carolina on Feb. 20, 2014, while forcing 21 Tennessee miscues.

– In two consecutive home games (last vs. Auburn on Jan. 17), UK has won a game after trailing at the half at home.

– The victory marked the first time since March 1, 2015 against No. 2/2South Carolina, that UK has defeated a top-25 SEC opponent at home.

– Kentucky and Tennessee exchanged points for the first period, with UT holding the 19-18 advantage going into the second period.

– UK started on a 7-2 run in the first 1:48 of the third period, with all seven points coming from Epps.

– The Wildcats were able to take the lead, 43-42, thanks to a 3-pointer from Taylor Murray.

– UK was perfect on its first six shots in the third period.

– UK never rescinded the lead for the rest of the contest, but Tennessee came within one point in the final seconds of the game.

Individual Notes
– Makayla Epps led the team with 23 points, 14 of which came in the third period alone. Epps also notched two rebounds, an assist and a block.

– Batouly Camara, in her first career start, was just shy of a double-double with eight points and a team-best nine rebounds to go with two blocks.