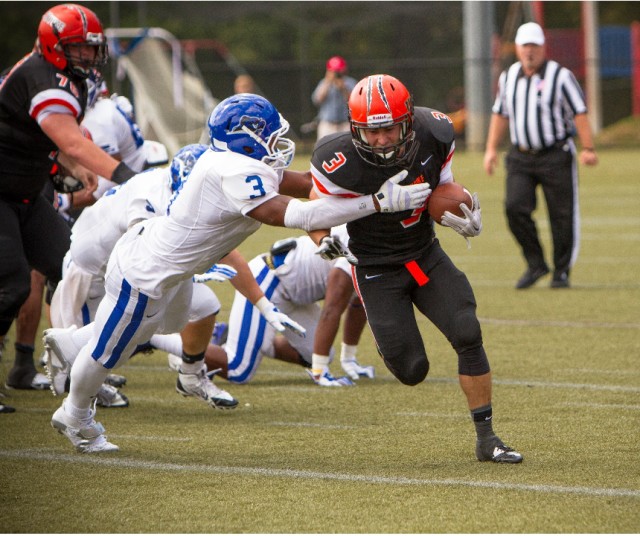 Photo: Seth Millar carries the ball on Saturday on his way to a team-best 96 yards on the ground.

PIKEVILLE, Ky. – Led by Branden Cresap’s 271 yards through the air and three touchdowns, the Lindsey Wilson offense scored on seven straight drives to top the University of Pikeville 44-14 on Saturday afternoon at the Hambley Athletic Complex.

Cresap’s favorite target was Chaz Barnes who came down with four highlight-reel worthy catches for 104 yards as six different Blue Raiders scored touchdowns, including Alex Abner’s 33-yard interception return in the third quarter to make it 44-7.

After going down 14-0 on the first play of the second quarter, UPIKE got on the board with Shawntez Johnson bringing down a towering fade from Tyler Guffey with 9:26 left in the frame. The 14-7 score was as close as the Bears would get the rest of the day as Lindsey Wilson took a 24-7 lead into halftime after a school-record 51-yard field goal from Caleb Keeton as time expired.

The Blue Raiders added three touchdowns in the third quarter to go up 44-7 and their defense gave up just one more score as Seth Millar ran in an 11-yard touchdown for the Bears with eight minutes to play. Millar heated up in the second half, finishing with a game-high 96 yards on 17 carries.

Guffey, who finished 4-for-10 with a touchdown, split time in the game with fellow freshman R.J. Rosemond Jr. who completed 5-of-12 passes for 57 yards with an interception. For the game, LWC outgained UPIKE 368 to 256 in total offense and led the first-down battle 24-14.

On the defensive side, Dontevius Daniel paced the Bears with seven tackles, including three solos, while John Dudley Hilton added six tackles and Desmond Davis and Quan Fletcher both chipped in with five. Lindsey Wilson’s Jerry Long tallied a game-high 11 tackles and Corrion Cooper added five tackles and a sack.

UPIKE returns to action at 1:30 p.m. ET on Saturday at No. 11 Cumberlands in Williamsburg, Ky. The Patriots are coming off a runner-up finish in last season’s NAIA National Championship.