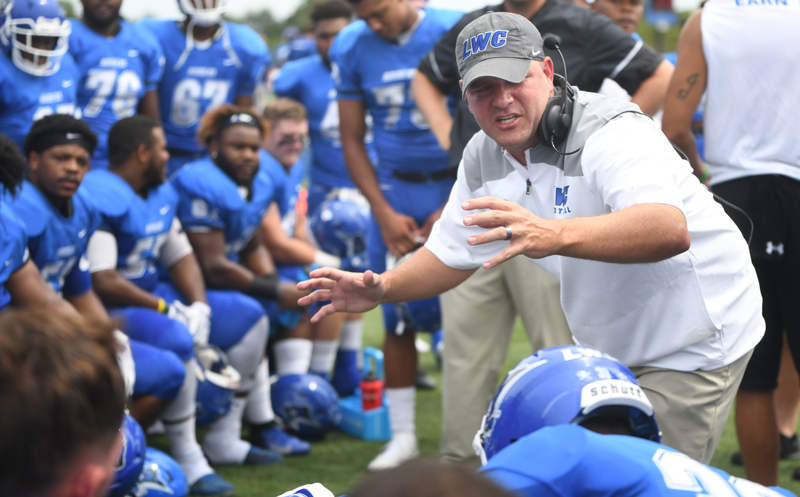 “I am humbled and honored to have been chosen by the AFCA for the Assistant Coach of the Year award for the NAIA,” Kleckler said. “I am grateful to represent Lindsey Wilson College and its athletics department.”

Klecker just completed his second season as the Blue Raiders’ defensive coordinator and 12th year overall in collegiate coaching. He led the Lindsey Wilson defense to a top-10 ranking in the NAIA in pass defense. The Blue Raiders ranked 13th in the NAIA in scoring defense, surrendering just 18.1 points per game. Lindsey Wilson held its opponent to 15 or fewer points seven times during the season.

Lindsey Wilson finished the 2018 season with 23 takeaways to help the Blue Raiders finish with a +10 in turnover margin — which is third best in the Mid-South Conference.

Lindsey Wilson finished this season with a 7-3 record.

“Phil Kleckler and his family have been a great fit for our football program since they joined us two years ago,” Lindsey Wilson head football coach Chris Oliver said. “Coach Kleckler works diligently to help our young men develop on and off the field, and he fully embraces that coaching is about more than just the results on gameday.

“He continues to do an excellent job leading our defense while serving our program very well in his role as our staff community outreach coordinator,” Oliver added. “I am thrilled that Coach Kleckler has been selected by the AFCA for this prestigious award. He is an excellent choice for this honor.”

Prior to coming to Lindsey Wilson, Kleckler served on the Northern Athletics Collegiate Conference’s Division III Assistant Coaches Committee for three years. He is a 12-year member of the AFCA and has attended the AFCA Convention every year since 2009.

“This achievement would not have been possible without the support of Coach Oliver as well as the hard work of the other coaches and our student-athletes,” Kleckler said. “Thank you to coach Oliver, President Bill Luckey, and Athletics Director Willis Pooler for their continued support. And, thank you to the AFCA for this incredible honor.”

Klecker is the second Lindsey Wilson assistant coach to receive the honor. Mike Gutelius earned the honor in 2015. Lindsey Wilson is one of 15 institutions to have two all-time recipients of the honor.

The Assistant Coach of the Year award was first presented in 1997 and was created to honor assistant coaches who excel in community service, commitment to the student-athlete, on-field coaching success and AFCA professional organization involvement.