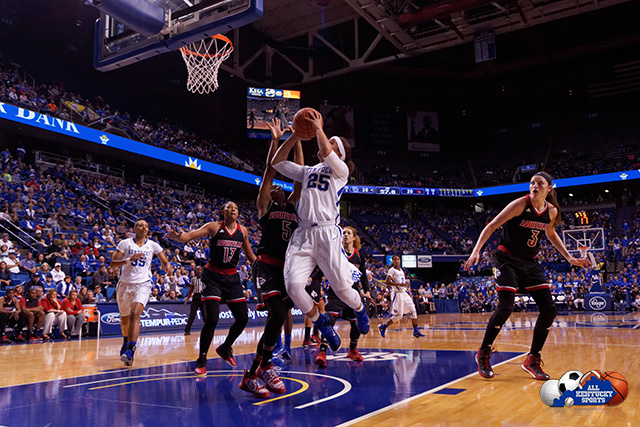 BIRMINGHAM, Ala. –After being named the espnW National Player of the Week on Sunday evening following her performances in Kentucky’s wins over Louisville and Middle Tennessee, junior guard Makayla Epps has been named the Southeastern Conference Player of the Week, the league announced Tuesday.

This is the second weekly conference accolade of Epps’ career, as she was named the SEC Co-Player of the Week on Feb. 16, 2015. Last week, Epps was named to the 2015-16 Naismith Trophy Women’s College Player of the Year Early Season Watch List.

The native of Lebanon, Ky., started her impressive week against in-state rival Louisville at Rupp Arena, putting together one of the best individual performances for a Wildcat vs. UofL in the Matthew Mitchell era. Epps went 10-of-11 from the field against the Cardinals to post the highest field goal percentage for a UK player with at least 10 attempts since 1987. The junior went for 24 points, four rebounds, four assists and three steals in the game. Her season-best 24 points were the second most points scored for a UK player against UofL in the Mitchell era.

Epps continued her strong play a few days later at Middle Tennessee, posting 17 points on 8-of-13 shooting with four assists and three steals. The guard stepped up when UK needed it most. After a 7-0 MTSU run cut the Kentucky lead to four, Epps went on a 5-0 run to push Kentucky back in control.

Epps currently leads the No. 8/8 Wildcats in scoring, averaging 17.3 points per contest and dishing out an average of 6.4 assists per game, which ranks 10th in the nation. Epps also holds the 13th-best assist to turnover ratio in the NCAA, with 51 assists and 16 turnovers for a ratio of +3.2. Entering the weekend, Epps was one of just eight players in the NCAA this year to have recorded a triple-double, and is just the second Wildcat in program history to accomplish the feat. Epps had a tremendous game against Morehead State on Nov. 18, pouring in 21 points while also grabbing 11 rebounds and handing out 12 assists. It was the first triple-double since Leslie Nichols’ 18-point, 13-rebound, 11-steal effort on Feb. 14, 1986, and was also the first time that a Wildcat had 12 or more assists in a game since Dec. 1, 1993.