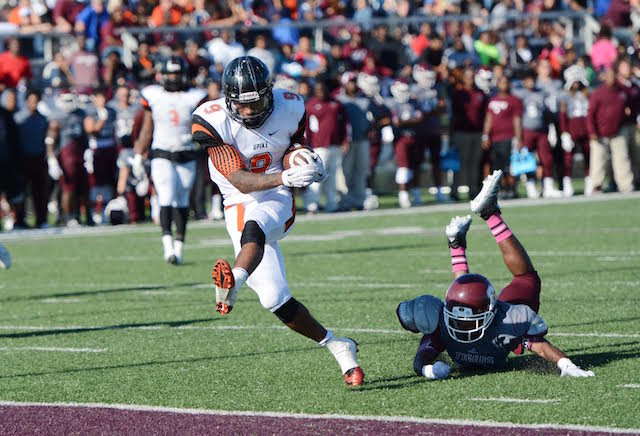 PIKEVILLE, Ky. — University of Pikeville sophomore running back Quan Weaver was selected to the 2015 AFCA NAIA Coaches’ All-America Team, announced on Tuesday by officials from the American Football Coaches Association.

The AFCA has selected an All-America team since 1945 and currently selects teams in all five of its divisions. The AFCA teams are special as they are chosen exclusively by the coaches themselves.

Weaver is the third player in UPIKE history to earn an All-American award from the AFCA, joining kicker Kyle Chilton in 2008 and defensive back Antwan Marsh in 2005.

The sophomore from Frankfort, Ky., had a record-breaking campaign in 2015, rushing for a school-record 1,566 yards. Other records broken for a single season include points with 96, total touchdowns (16), rushing touchdowns (15), 100-yard games (nine) and rushing yards per game (142.4).

The 1,566 yards gained on the ground were also the most of any back in the NAIA during the regular season. Heading into 2016, Weaver is already third at UPIKE in career carries with 386, third in rushing yards with 2,215 and third on the career touchdown list with 22.

Weaver’s highlight game of his sophomore season came in the eight-point loss at Campbellsville when he rushed for 223 yards and three touchdowns, picking up 8.6 yards per carry.

The selection process for the all-America teams involve a committee made up of three head coaches from each of the AFCA’s seven district. The coaches are responsible for ranking the top players in their respective districts prior to a conference call between the district chairmen and the committee chairman on which the team is chosen.

Weaver is one of two sophomores selected to the team which is also comprised of 14 seniors and nine juniors.