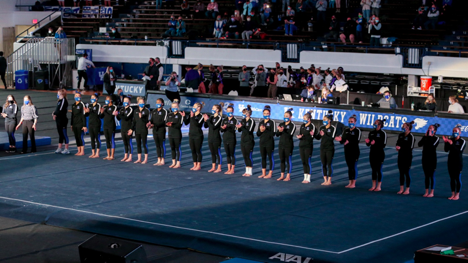 No. 14 Kentucky is headed to its 32nd all-time NCAA regional appearance.

The Wildcats earned the fourth seed at the Salt Lake City Regional, as announced by the NCAA on Monday. Kentucky will go head-to-head in Session II of the second round against No. 3 LSU—the regional’s top seed—as well as No. 22 Utah State and the winner of the first-round matchup between No. 30 Temple and No. 34 Arizona.

The Salt Lake City Regional will be rounded out by No. 6 Utah—the regional’s host team and second seed—in addition to 11th-ranked and third-seeded Arizona State, No. 17 Boise State and No. 21 Southern Utah.

The nine teams will be joined by individual competitors from No. 42 Washington, No. 45 Northern Illinois, No. 46 George Washington, No. 47 Southeast Missouri and No. 50 Bowling Green—whose teams did not receive an NCAA regional berth.

The two highest-scoring teams from each quad meet will advance to the Salt Lake City Regional final the following evening, where two teams will in turn progress to the NCAA Championship semifinals in Fort Worth, Texas.

Kentucky will begin Session II on uneven parallel bars, followed by balance beam and floor exercise, then end the night on vault.

The Wildcats’ best performance of the season came in a 197.100-196.800 head-to-head win over a second-ranked LSU team on Feb. 26. The Cats finished fourth at last weekend’s Southeastern Conference Championship, while the Tigers landed in second.

Kentucky advanced to its first NCAA Championship semifinal appearance in 2018.