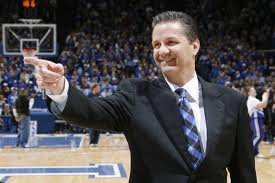 John Calipari released a statement on the retirement of Hall of Fame Coach Roy Williams.

“I want to congratulate Roy Williams on a fantastic career and wish he and his wife, Wanda, the absolute best as they move on to the next part of their lives. I am so thankful for Roy’s friendship throughout the years. He is someone I could call about anything and did so many, many times. I have the ultimate respect for Roy in how he did his job, how he coached his team, how he won at the highest level, and most importantly, how he cared about his players. He won everywhere he has been and has coached some of the game’s best players. He will go down as one of the greatest coaches in the history of our game.

“The thing that speaks to me the most about Roy is how he never forgot about the people who helped get him there. Roy would always make sure his high school coach, Buddy Baldwin from Asheville, was sitting behind his bench and along for every step of the journey. And then the respect he had and showed for Coach Smith was always first class. His ability to give credit and respect the tradition and those before him was, to me, something that always said who he was as a coach and a man. The game is going to miss his everyday presence.”