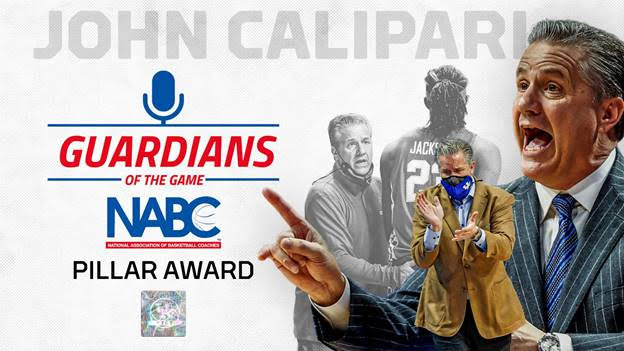 KANSAS CITY, Mo. – Kentucky men’s basketball head coach John Calipari is one of eight coaches who will receive the National Association of Basketball Coaches’ Guardians of the Game Pillar Awards next month.

The Guardians of the Game Pillar Awards represent the NABC’s core values of advocacy, education, inclusion and leadership. Calipari is one of three coaches, alongside Harvard head coach Tommy Amaker and South Carolina head coach Frank Martin, who will receive the award for inclusion.

Calipari, Amaker and Martin are being honored for leading and launching the McLendon Minority Leadership Initiative, a coach-driven initiative to provide minorities a jump-start to their careers through practical experiences, opportunities to build their network, and instilling the values of John McLendon: integrity, education, leadership and mentorship.

The coaches will be honored April 2 during the NABC Guardians of the Game Awards Show. The show is the finale of the 2021 NABC Convention and will be conducted this year on a virtual platform due to the COVID-19 pandemic. The NABC holds its convention each year in conjunction with the NCAA Men’s Final Four. The show will be broadcast live April 2 on Stadium (watchstadium.com) beginning at 6:30 p.m. ET.

Calipari spearheaded the MLI after watching the nation confront issues of social injustice and racial inequality.

In the middle of a Facebook Live series to raise funds for COVID-19 relief, “Coffee with Cal,” Calipari paused the show and shifted his attention to the MLI. He recruited Amaker and Martin, both members of the NABC Committee on Racial Reconciliation, to join him to make change on college campuses and present opportunities for minorities. His idea was to recruit minority candidates, known as MLI Future Leaders, and provide access and opportunity with real-world experience and networking platforms designed to elevate talented young women and men of color.

The initiative has drawn more than 80 coaches nationally from basketball, football and baseball across to serve as both MLI Ambassadors and be the primary source of funding. The MLI recently reached $1.5 million in funding.

A total of 33 Future Leader opportunities have been filled at 23 institutions and organizations less than a year after the program was launched. Additional opportunities will be available this spring as the MLI kicks off its second cohort. The MLI has generated almost 700 applicants to date.

The MLI recently announced that Ro Rhodes, who is serving in the UK Athletics marketing department, is the first recipient of a Future Leader opportunity to be hired following time spent in an MLI-affiliated athletic department. Rhodes will be joining the Charlotte Hornets as an account manager with a focus on partnership activation.

Calipari, a Naismith Memorial Basketball Hall of Famer, just completed his 12th season at Kentucky. He has guided six teams to the Final Four, led the 2011-12 UK team to a national championship and helped 52 players earn selection in the NBA Draft during his 29-year college coaching career.

The second-winningest coach in program history has a 339-93 record at Kentucky with four Final Four appearances, six Southeastern Conference regular-season championships and six league tournament titles. Despite missing the 2021 NCAA Tournament after navigating through the COVID-19 pandemic with a historically young and inexperienced team, the four-time SEC Coach of the Year will still end this season’s NCAA Tournament with the most NCAA Tournament wins (31), most Final Four appearances (four), most Elite Eight trips (seven) and most Sweet 16 appearances (eight) over the last 12 seasons.

Calipari is one of just two coaches to win Naismith Coach of the Year three times and, with a 784-233 on-court record, is approaching 800 career on-court wins.

In his goal to lead a players-first program, he has helped more than 50 young men realize their dreams and reach the NBA level with 52 players earning NBA Draft selections, including a record five first-round draft picks in 2010. Two years later, six Wildcats heard their names called at the 2012 draft, the most in the two-round draft era. UK, with Calipari’s help, would tie those six picks again in 2015, including a record-tying four lottery selections. His four No. 1 overall picks are more than any other coach, and he’s had 41 players drafted during his first 11 years at Kentucky, including 31 first-round picks, more than the entire Big Ten combined in that time span.

Much like he did at UMass, where his players graduated at nearly 80%, Calipari has stressed academics. Fifteen of his last 18 seniors at Memphis earned their bachelor’s degrees, and all 18 players at UK who were eligible to graduate by the end of their senior years walked away with a diploma in hand, including four players who earned their degree in just three years. . Three more players in Zan Payne, Olivier Sarr and Riley Welch are on track to graduate this spring. Calipari’s teams routinely have posted a combined team grade-point average of 3.0 or better, including the fall semester of the 2020-21 academic year.

Calipari has raised millions of dollars to help the lives of those in need in the Commonwealth and beyond. He has had a particular passion to assist those impacted by natural disasters. For instance, in 2010, he used a telethon to raise more than $1 million for victims of the devastating earthquake in Haiti. He followed that up with telethons in 2012, raising $1 million for victims of Superstorm Sandy, and in 2017, for victims of Hurricane Harvey.

Calipari launched his foundation in 2012, and since then the foundation has worked with several key partners and donated more than $1.5 million, a figure that does not include matching funds that have been contributed from individuals and corporations. In 2013, Calipari initiated hosting an annual alumni weekend around his basketball fantasy experience with the intent to raise money for charity. After generating $350,000 for selected organizations and charities during the inaugural game, the weekend has generated millions of dollars for charity since its inception.

In 2019, when federal workers were without pay due to a government shutdown, he, his wife and his foundation assisted workers with financial help and grocery gift cards. He and his wife, Ellen, teamed up with Fayette County Public Schools to help families in need during the COVID-19 pandemic.

Calipari’s latest efforts include donating $50,000 to help with the relief efforts in Eastern Kentucky following devastating flood damage in the region.