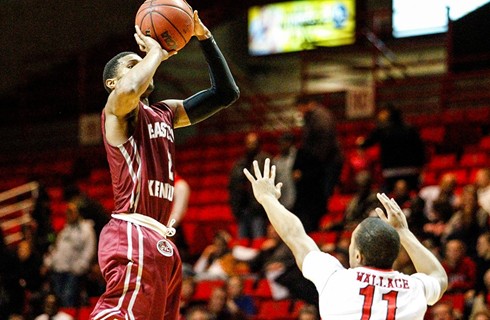 Corey Walden scored a game-best 23 points. He shot 50 percent from the field and made all 10 of his free throw attempts. The senior added five rebounds, one assists and one steal. Eric Stutz had 18 points and five rebounds. Timmy Knipp contributed seven points, six rebounds, four assists and three blocks.

Knipp and Walden got the big run started with two free throws each. Stutz got his own rebound and put it back in to extend the lead to 11, 61-50. Walden scored Eastern’s final seven points.

Eastern limited Southeast to 26 percent shooting from the field in the second half and 33 percent for the game. After getting out-rebounded by seven in the first half, the Colonels won the battle of the boards by four in the second half.

Bradley, SEMO’s leading scorer, finished with just 10 points on 2-of-9 shooting from the field. Aaron Adeoye scored 12 points and grabbed seven rebounds for the home team.

The Colonels were down three, 30-27, before going on a 10-1 run over the final three minutes of the first half. Walden scored the first five before Denzel Richardson hit a three-pointer from the right wing. Jonathan Hood’s offensive rebound and put-back at the buzzer capped it and sent the visitors to the locker room up 37-31 at the break.

Four straight to start the second half allowed Southeast Missouri to close the gap to two, 37-35.

The Colonels have held eight straight opponents to fewer than 70 points.

Senior guard Corey Walden entered the game shooting 56.6 percent from the field this season. He had made 60.7 percent of his shots over the previous seven games. Walden made “just” 50 percent on Saturday at Southeast Missouri.

SEMO’s Jarekious Bradley came into the game averaging 16.2 points per game. The Colonels held him to 10 points on 2-of-9 shooting.

Eastern Kentucky entered the game second in the nation in turnover margin (+10.1) and fourth in steals per game (10.9 spg). EKU had three fewer turnovers and seven steals.

Eastern Kentucky leads the all-time series, 28-19. EKU has won five straight against Southeast Missouri and 13 of the last 15. The Colonels are 10-11 in games played in Cape Girardeau, and have won five straight on the Redhawks’ home court.