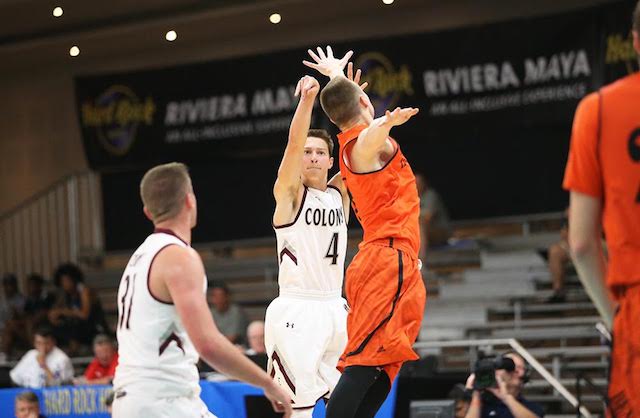 CANCUN, Mexico – The Eastern Kentucky University men’s basketball team drained four three-pointers in overtime to pull away for a thrilling, 91-82 win over Idaho State on Tuesday afternoon in the 2016 Cancun Challenge at the Hard Rock Hotel Riviera Maya.

EKU (2-3) trailed Idaho State, 71-69, following a layup by Geno Luzcando with under a minute to play; however, sophomore forward Nick Mayo buried a jumper in the paint with eight seconds on the clock to tie the game and send it into overtime.


The Colonels exploded in the extra period. Mayo (1-of-1), senior guard Isaac McGlone (1-of-1) and junior guard Dillon Avare (2-of-2) combined for four three-pointers and junior forward Zach Charles went 6-of-6 from the free throw line as EKU scored 20 points in the five-minute frame to pull away for the victory.

Mayo posted a double-double in the back-and-forth affair, scoring 21 points and grabbing a season-best 10 rebounds, seven of which were offensive. He also matched a career-high with four assists.

Senior Jaylen Babb-Harrison poured in 20 points and matched career-highs in rebounds (seven) and assists (seven), while Avare finished with a career-high 12 points and McGlone chipped in nine points and career-best five steals.

EKU forced the Bengals into a season-best 30 turnovers and converted those miscues into 32 points.

The game featured eight ties and six lead changes. ISU ran out to its largest lead of the game, 27-15, following a three-pointer by Robert Jones with 7:28 remaining in the first half. EKU responded with a 13-2 run that cut the deficit to one, 29-28, on a triple by freshman guard Asante Gist with 3:29 on the clock. After ISU pushed the lead back to five, a pair of free throws by Babb-Harrison with seconds on the clock made it 38-35 at halftime.

The Bengals opened the second half on a 7-0 run to get their lead back to 10, 45-35. However, the Colonels kept clawing back. A bucket in the paint by freshman DeAndre Dishman tied it at 59-59, and a three-pointer by McGlone with 4:41 on the clock finally gave EKU its first lead, 64-61, since early in the game.

EKU will face Georgia State in the Mayan Division Championship game on Wednesday at 3:00 p.m.