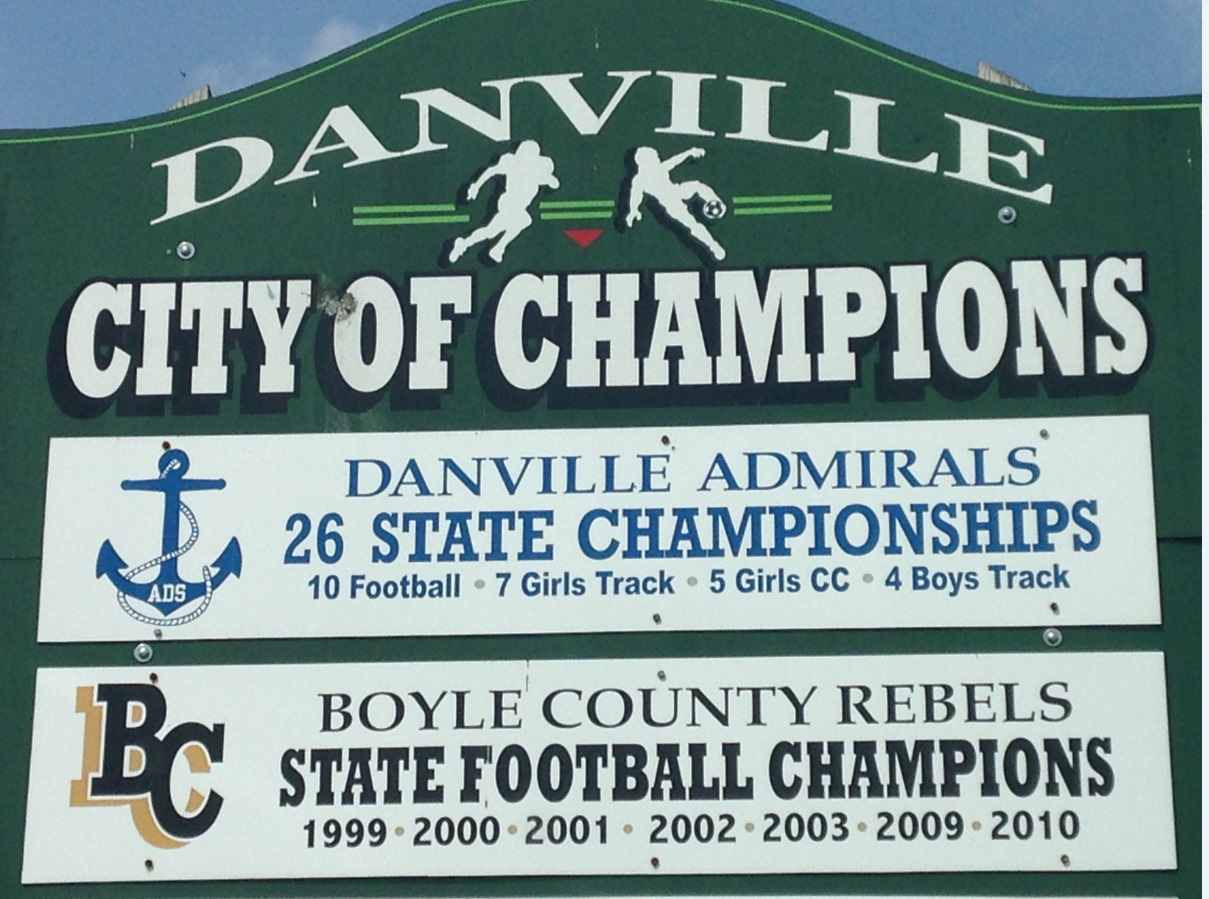 This evening, Boyle County (2-0) will travel across town to Admiral Stadium for another chapter in the historic rivalry series with Danville.

The Admirals (2-0) once dominated the series, particularly in the 1980’s and 1990’s. At one point, Danville defeated Boyle County 20 consecutive times.

That all changed when the Rebels turned things around and ended the streak in 1996. Since then, Boyle County has won 12-of-17 games.

Despite a lack of recent success, Danville has reasons to be optimistic in tonight’s game. The Admirals have been impressive in an opening 41-14 win over LaRue County and last week’s 46-18 thrashing of Rockcastle County.

Quarterback Zach Dampier has led Danville’s high-powered air raid attack by passing for 507 yards and 7 touchdowns in the Ads’ first 2 games. He was an impressive 15-of-19 for 390 yards and 5 scores in the win over Rockcastle County.

Danville’s Dmauriae VanCleave, Triston Coffey, Jakobi Turner and Tyrek Bradshaw are capable of going the distance every time they touch the ball.

Most importantly, Clay Clevenger’s team has shown improved line play on both sides of the ball this season.

With that being said, the Rebels have knocked off two higher-level opponents this season and will still be favored to finish tonight with a 3-0 record.

Like Danville, Chuck Smith’s team is led by a talented quarterback in senior Josiah Robbins. Robbins has thrown for 347 yards and 6 touchdowns in the 2 wins. He has also rushed for 48 yards.

The Rebels are ranked No. 1 in Class 3A in this week’s Associated Press rankings. Danville is No. 4 in Class 2A.

The two programs have combined to total 13 state championships and an NFL player (Jacob Tamme, Boyle County) since 1991.

My keys to the game:

– Get pressure on Dampier

– Take control of the game early on the road

– Hit the “homerun” play when it’s there

– Hold their own on the offensive and defensive line

– Punch hard with a big play early in the game

– Can Boyle County’s secondary keep up with Danville’s speed?

This game can realistically go either way, but I will take the Rebels in a close one, 35-31

Click here to check out some Danville highlights from last week:


I took to the streets this week to get some input from fans of both teams:

1. Describe the Boyle County vs. Danville rivalry in one sentence.

“One of the states best rivalries that remained, even after one grew and they were no longer in the same district. In a community where people will give a politically correct answer publicly about the game (depending who they talk to), but deep down, know they hate the other one no matter how old they are or what their profession is.”

“A traditional rivalry that I’ve been blessed to be a part of since I was a toddler.”

“I moved here when I was a junior and actually went to Boyle County. At that time, Boyle couldn’t win a football game if their lives depended on it! They would get beat by 40 or more when they played Danville!”

“Best game of the YEAR!”

“You (Boyle County) got beat 19 years in a row, you guys don’t run anything!” – Roy Walker

“Crosstown rivals that have a strong dislike for each other.”

“To sum up the rivalry in one sentence is that it’s been one-sided. Danville dominated in the 80’s and 90’s, winning 19 in a row…mostly blowouts. But Boyle has won the rest since then, with Danville only winning 5 games in the 2000’s.” – Parrish Denny

“ Boyle vs. Danville is a game of pride and bragging rights for two historically successful programs.  Knowing the winning tradition at both schools makes this rivalry special.” – Jay Jackson

“Boyle County and Danville is a true rivalry in every sense of the word rivalry.” – Jason Alexander

2. Do you respect your opponent in this game? If not, why?

“Absolutely not. While I respect the kids and most the adults and some coaches, I have no respect for how they started their success. You ask a Boyle fan, they won through hard work, discipline and dedication. You ask anybody involved with football or has followed it since 1999, they will say it’s a win streak built on a red shirt, transfers (aka recruits), turning a blind eye to off the field activities and putting the adults and boosters before the kids.”

“I respect any show of loyalty and appropriate school spirit…even at Boyle County. Of course, I still hope they lose every time we play them.”

“No respect for Boyle!”

“The rivalry wasn’t an issue for me until my boys started sports! It’s a whole new ballgame then!” – Gretchen Dunn Goodman

“Yes, but I’m Black & Gold through-and-through and have shared a ‘healthy’ animosity towards our crosstown rivals when my kids were growing up.” – Julie Jones

“Lots of respect for Danville athletes. It is never the kids that cause all the drama. It is the parents.”

“It’s hard to respect a school that doesn’t respect your school.” – Danville fan

“I respect Boyle County because of the attitude and mindset they instill into student athletes there.  Students play with pride and have a winning attitude.  Students know expectations are high and they keep raising the bar.  I love the saying on the side of the home bleachers, “Athlete by nature, Champion by choice.” – Jay Jackson

“Yes, I respect Danville and always will. I know quite a few people at Danville and they are all good people and some of them are family. I don’t have hate in this rivalry like a lot of other people do.” – Jason Alexander

3. Do you consider Danville/Boyle the game of the year on your schedule?

“Not the game anymore since we’re not in the same district after they (Boyle County) grew. When we were, and it was the last game of the year occasionally falling on Halloween, absolutely it was. Especially for us since for a very, very long time it was almost a guaranteed win. It matters a lot now but then it was about making playoffs and possibly ending one team’s season”

“I consider the play off games the ‘games of the year’ but beating Boyle county makes a season even more memorable.”

“Game of the year should always be the State Championship. Every game in between is just a part of the foundation to get there!”

“Not really we have bigger goals, but beating them is always nice.” – Roy Walker

“I do consider it the game of the year because it’s always been just a big rivalry and talked about so much.”

“Everyone will have their opinions about why this game brings out the best and worst, but all you have to do is look at how the stands fill up on that Friday in September to realize it’s really about community spirit and pride, and none of us would choose to live anywhere else.” – Julie Jones

“Not really. During my era Boyle was really a non-factor…somebody who we played that everybody would get a chance to play.”

“It’s going to be a great game tomorrow! Go Ads!”

“We’re excited for another year of this rivalry and we look forward to continuing the success that we’ve had the last several years.” – Statement from Boyle County Student Section

4. What are the craziest things you’ve seen as a result of the rivalry (such has pranks to the fields, interactions around town, etc.)?

“It’s always been them painting or stealing our anchors and us painting their bell.”

“Tradition as I recall was painting the bell/anchor.”

“The funniest is when they (Boyle County) won their first title, they painted the front of our school ‘STATE CHAPS’. A picture of it even made the paper and yearbook.”

“Has anyone else mentioned that one of Boyle County’s starters was involved in one of the biggest felony cattle theft cases ever?”

“I think pranks have gone too far in recent years, but my favorite was when DHS painted the top of Boyle’s bell admiral blue.”

“The pranks that have gone on with the two schools have always been in good fun.  Students from both schools get excited and want to express their school spirit.  I heard that Danville is having a blackout tonight; saying they can wear black better than Boyle.  I remember Boyle messing with the Anchor at Danville and I remember Danville making a mess at Boyle.  I think it is good for students to feel a sense of pride in their school and athletic teams.  I enjoy the respect that each school has for one another.  I know that many students are friends with students from rival school.”

“When I was in high school, Danville came to Boyle and painted ‘We Will Chrush You!” on the side of the school. And that is how they spelled it.”

“The anchor being taken and used as an anchor for a boat on Herrington Lake. Except the line ‘broke’ and the anchor is still at the bottom of Herrington Lake somewhere.”

What is your greatest Boyle County vs. Danville memory in any sport?

“That’s a tough one as I was literally born into this program. I have a signed football from Tom Duffy that he brought to the hospital when I was born. I would say ending the controversial winning streak on their field was pretty awesome.”

“Even as a larger school they will never win 19 in a row like we did against them.”

“My favorite memories are more personal. I miss the days of my Uncle Billy Joe announcing. I miss my Grandmother, who once left the hospital right after having her appendix removed (nothing kept her from the Friday Night Lights). I miss my Uncle Tony, who had his funeral at Admiral Stadium. I miss our cousin Jimmy Neikirk, Jay Bowling, etc. Though I miss them dearly, I am incredibly blessed to be able to bring my kids up with the same memories and tradition! Admiral pride runs deep! Go Ads!”

“I’m a track guy. I loved destroying them in any meet! GO ADS!” – Roy Walker

“My greatest moment where I’ve seen each school and their pride show was either 1) Spencer Perrin leaving Danville and going to Boyle or 2) Judy Mason leaving Boyle and going to Danville.  I’ve heard of great games in basketball and football, but in the 10 years I’ve been part of the community I’ve seen a lot of coach and administrative turn over at Danville High School.”

“This goes back to my soccer days at Boyle County. Every year, before we played Danville (yes I’m a Boyle alum but cheer for Danville now), our coach would have us practice penalty kicks after each practice. Every year we went into shoot out with Danville. Never happened with any other team…just Danville.”

NOTE: Some responses had to be omitted