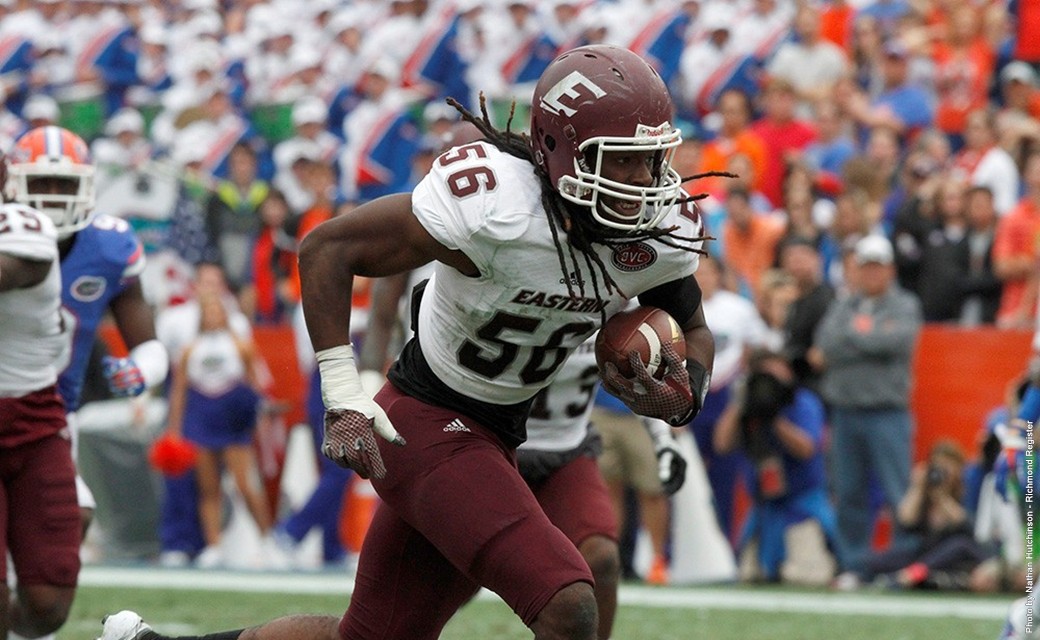 RICHMOND, Ky. – Five Colonels combined for a total of seven touchdowns as the Eastern Kentucky University football team rolled past visiting Valparaiso, 52-10, in its season-opener on Thursday night at Roy Kidd Stadium.

Eastern struck early, as a 36-yard pass from junior Kyle Romano to senior Joel Brown help set up a four-yard touchdown run by true freshman Ethan Thomas with 10:55 remaining in the first quarter.

Five minutes later, senior All-OVC cornerback Stanley Absanon intercepted a pass at the EKU 44-yard line and returned it 56 yards for another touchdown.

After the two teams exchanged field goals, another true freshman emerged on the scene for Eastern. With 4:02 remaining in the second quarter, freshman Arien Beasley took the second end of a reverse and scampered past the pylon from 11 yards out to make it 24-3 in favor of Eastern Kentucky.

A Jeff Glover touchdown catch from Bennie Coney took the Colonels safely into the locker room at halftime up on the Crusaders, 31-3.

It was, again, all EKU in the second half, as Coney and Glover hooked up for another touchdown – this one from 30 yards out – late in the third quarter to make it 38-3.

Two more EKU touchdowns followed, as Florida transfer Adam Lane and sophomore Kentayvus Hopkins both found pay-dirt for the first time as Colonels. The only Crusader touchdown came with 45 seconds left in the game as Jake Hutson scored from 16 yards out to make it 52-10.

The Colonels will be back in action on Sept. 12 at North Carolina State.

Valparaiso turned the ball over three times, EKU suffered two late interceptions. Eastern ranked second in the nation with 33 turnovers forced in 2014 and was first in the OVC in turnover margin (+0.23 per game).

Kyle Romano started at quarterback. Bennie Coney did not start due to an illness. It was Romano’s second collegiate start and first since Nov. 23, 2013 at Murray State.

Redshirt sophomore kicker Lucas Williams attempted his first collegiate field goal in the second quarter and converted it from 32 yards out.

Absanon returned a kickoff 62 yards in the second quarter. It was his longest kick return since his freshman season in 2012.

Florida transfer Adam Lane scored his first touchdown as a Colonel with 2:10 left in the third quarter. The running back took it in from three yards out.

Kentayvus Hopkins fourth quarter 1-yard rushing touchdown was the first of his career for the redshirt sophomore.