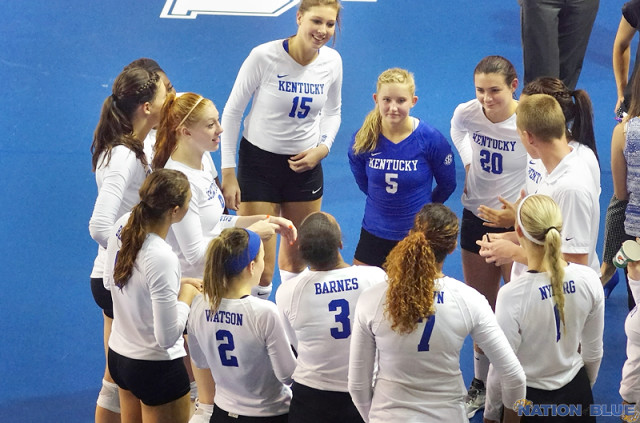 LEXINGTON, Ky. – Behind the dazzling-defensive dominance by sophomore Kaz Brown the No. 24 Kentucky volleyball team rallied for a 3-1 (25-27, 25-18, 25-20, 25-23) win over rival Louisville on Sunday in front of 3,338 fans in Memorial Coliseum. Brown became the first middle blocker to register a double-double since 2007 when she had 10 kills and a 25-point rally-scoring era record 13 blocks to pace the Wildcats.

“I think one of the good things is that our team understands that we are not near where we are capable of and we have a lot of hard work ahead of us,” said 11th-year head coach Craig Skinner on the win. “To get the W and do some things better than we have done allows us to evaluate where we are and keep taking a step forward with our improvement.”

With the win, Kentucky has now won three-straight against the Cardinals and four of the last five meetings. UK improves to 7-5 on the year, while Louisville drops to 6-4. With today’s victory, Kentucky has now concluded non-conference action and will turn its focus to league competition. UK will open SEC play on the road at South Carolina on Sept. 25 at 7 p.m. in a match that will air on the SEC Network.

Brown led the way at the net for the Blue and White as the team registered 17 total blocks in the victory. The sophomore from Waterloo, Iowa, started the match hot with five blocks in the opening frame and she did not let up. Senior setter Morgan Bergren contributed six turn backs, while sophomores Darian Mack added five and Emily Franklin three, respectively. Brown’s 13 blocks marked a rally-scoring era record for the Cats – and the most in a four-set match.

Mack paced the attack with a team-high 14 kills. She has now registered double-digit kills in three-consecutive matches. Junior Anni Thomasson had 13 hammers in her first full action since Sept. 1. Thomasson also notched her 19th career double-double as she registered 13 digs as well. Brown was the final Wildcat to reach double-figures with 10 kills. Franklin added six hammers and Bergren posted five – including the match-clinching dump. She also dished out 38 assists and found six Wildcats for at least one kill on the night.

Sophomore libero Ashley Dusek had a match-high 17 digs. She has topped double figures in all but one match this season. Bergren narrowly missed out on a double-double of her own with nine dug balls, and freshman McKenzie Watson matched the setter’s output.

Set One
The teams swapped points to open the match until UK scored three-straight to take a 4-2 edge in the match. Bergren and Brown teamed up for a rejection and Mack followed with a kill for the run. Kentucky stretched the lead to four at 8-4 following a Franklin solo block and a Louisville attacking error. A 9-2 run by the Cardinals allowed the visitors to go in front 18-15 midway through the first. Consecutive blocks with Brown at the center of them enabled the Cats to tie the set at 22 apiece, forcing the visitors to burn their final timeout. Louisville scored the first point following the break, but Brown smashed a kill to tie it at 23. The Cards had set point, but committed a service error to make it 24-24. Franklin’s kill to the back row saved the second set point, but the Cards again tooled the block to go ahead 26-25. Louisville claimed the opening set with a block.

Set Two
Thomasson opened the scoring to begin the second and Brown followed with a solo block to give UK an early 2-0 edge. A Sharay Barnes smash down the line gave UK its largest lead in the early going at 8-5. The lead stretched to six at 12-6 following consecutive kills from Bergren and Mack forcing Louisville to use a timeout. Kills from Brown and Thomasson pushed the lead to 15-7 and Louisville opted to burn its final timeout. The Cardinals pulled to within four at 22-18, but ignited by Brown’s eighth block of the match, UK prevailed 25-18 to even the match at 1-1.

Set Three
Louisville scored the first point of the third stanza, but a 4-2 run by the Wildcats gave the home team an early 6-4 advantage. Brown’s 10th rejection of the night increased UK’s lead to 10-6 and forced the Cardinals into a timeout. A kill from Mack pushed the lead to 16-9. The Cardinals would not go away, however, and bridged the gap to two at 18-16. With Louisville stringing together points, Mack teamed up with Bergren to spell the threat. Brown was in on consecutive blocks to help the Wildcats roll to a 25-20, third set win by scoring six of the final eight points.

Set Four
The squads traded points back-and-forth to begin the fourth frame with the Cardinals looking to force a decisive fifth frame. An ace from Mack gave UK the first multi-point edge for either team at 6-4. Louisville would fight back and put together a 6-1 run to take an 11-8 lead. The Cards would maintain the edge until a Thomasson kill from the back row tied the score at 13. An erroneous misfire by the Cards followed by an ace from freshman Olivia Dailey allowed UK to take a two-point edge at 16-14. Louisville would rebound to tie it once again, this time at 16 all. The teams would then exchange scores until the visitors earned a two-point advantage at 22-20. UK fought back and tied it at 22 behind a Mack kill off of the block. Franklin followed suit and gave the home team the lead once again. The duo then teamed up for a huge block for match-point. The Cards staved off one set point before a crafty dump over Bergren’s head pushed UK to a 25-23 win and a 3-1 win in the match.

35 – Career matches Anni Thomasson has reached double-figures in the kills’ column with 13 today. She also had her 19th career double-double – the fourth-most in a career in the rally scoring era.
13 – Kaz Brown set the 25-point rally scoring era program-record with 13 blocks in today’s match. She also became the sixth Wildcat to register 10 or more blocks in a single match with her career outing.
11 – The number of matches that libero Ashley Dusek has posted double-figure digs this season. She has posted double-digits in all but one match this season with 17 today.
5 – Wins in the last six matches for the Wildcats against Louisville.
3 – Three-straight matches in double-figures for Darian Mack as she posted 14 kills in today’s match.
2 – Consecutive matches UK has won after trailing 1-0 in the match.
1 – Brown became the first middle blocker to record a double-double in the rally scoring era and first since any middle turned the trick since 2007. Brown had 10 kills and 13 rejections.

Head coach Craig Skinner on the non-conference slate…
“It’s been a challenge. We started 3-0 and we had some injuries. It’s not what anyone else goes through as well, but it certainly presented a challenge for our staff to understand how we are coaching this team. You can lose your composure and expect more from the freshmen than what they are ready for. We certainly didn’t schedule lightly and I’m glad because I think the adversity can help as we go through the season.”

Sophomore Kaz Brown on coming into her role as a big hitter this season …
“During the off season I got a lot stronger, gained a lot of core strength and shoulder strength. I think building a connection with Morgan helps a lot, too. That extra time in the spring season has definitely helped my game a lot, as well as gaining a bigger vision of the court and getting adjusted to the collegiate speed of the game.”

Sophomore Kaz Brown on how senior Morgan Bergren pushes the team…
“She is definitely the quarterback of our team, all of our offense runs through her. She does a really good job of knowing when to send the ball to the outside or when to send it over or back, and being able to mess with the other teams defense a little bit. Her decision-making helps us a lot and gets the momentum going for us.”

Senior Mogran Bergren on having the winning point in her last rivalry game against Louisville …
“Just the win itself is the most meaningful thing to me. We have had a shaky start and beating Louisville my senior year, you can’t get better than that. It’s awesome.”

Senior Morgan Bergren on rivalry with Louisville setter Katie George …
“It’s been a rivalry since we were 12 and we played for rival clubs. Then we went to rival schools, so, you know. We are two very high level competitors, so that has always been how we compete with each other.”

Junior Anni Thomasson on being behind in the fourth set …
“I think we knew we had to take it one point at a time, you can’t win a match in one point. Going down a couple points isn’t a big deal, we do it all the time in practice and we know we have to just push through.”