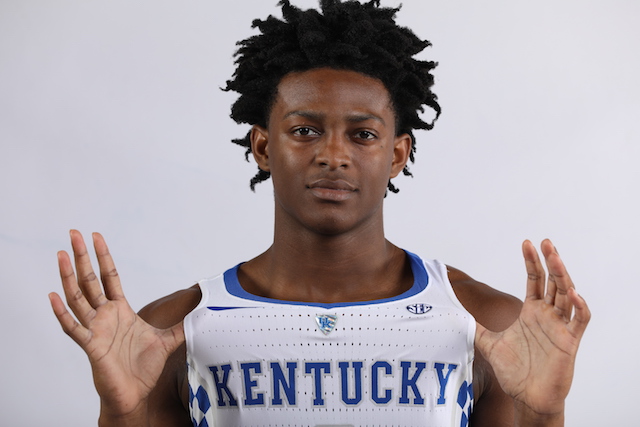 SPRINGFIELD, Mass. – For the first time in the history of the award, a Kentucky basketball player (Tyler Ulis) won the Bob Cousy Point Guard of the Year Award in 2015-16. The Wildcats, based on the preseason watch list for 2016-17, will look to make it two in a row with freshman point guard De’Aaron Fox.

Fox is one of 20 candidates on the preseason watch list for the Cousy Award, which is presented annually to the nation’s top point guard by the Naismith Memorial Basketball Hall of Fame. The Hall of Fame announced its original list Monday.

By mid-February, the watch list of 20 players will be narrowed to 10. In March, five finalists will be presented to the award’s namesake and the Hall of Fame selection committee. The winner of the 2017 Bob Cousy Award will be presented at the ESPN College Basketball Awards Show in Los Angeles on April 7. Players do not have to be on the watch list to win the award until the five finalists are announced.


Though Fox has yet to play a college game, he has the credentials to warrant the preseason recognition.

A Naismith High School Player of the Year finalist, Fox was named a first-team selection his senior season for both the All-USA Boys Basketball and the Naismith All-America squads. Fox played in both the McDonald’s All American Game and the Jordan Brand Classic. In the latter, he earned co-MVP honors with current UK teammate Malik Monk after scoring a game-high 23 points on 8-of-16 shooting to go along with five rebounds.

Fox was a three-time all-state performer out of Cypress Lakes High School in Texas. He was tabbed the Texas Gatorade High School Player of the Year in 2016 after leading Cypress Lakes with a pair of back-to-back 40-point performances in the Texas high school state playoffs.

Ulis became the first Wildcat in the history of the award to win the honor last season. The 5-9 guard, now with the Phoenix Suns, put together one of the best individual seasons for a point guard in school history. Among his many accomplishments included setting the UK single-season record for assists in a season with 246 dimes.