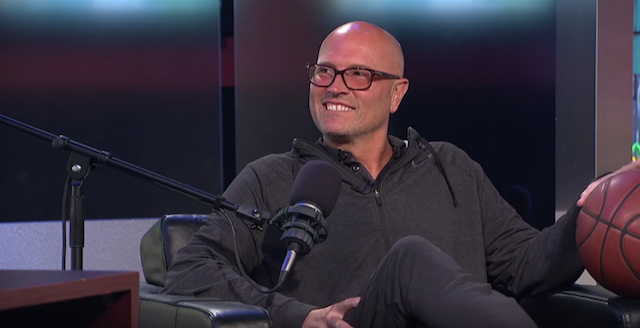 Chapman will make his UK Radio Network debut on Sunday for the Clarion exhibition game. Along with returning host Dave Baker, Chapman will join Tom Leach and Mike Pratt throughout the season in the live pregame coverage 90 minutes prior to tipoff to preview the upcoming matchup, discuss UK basketball news and take questions from the Big Blue Nation.


“As a kid born and raised in the western part of the state, I was incredibly lucky to play my college basketball at the University of Kentucky. It was, is and has always been a privilege,” Chapman said. “My earliest basketball memories are of the legendary Cawood Ledford calling Kentucky basketball games on the UK Radio Network. When Paul (Archey, president of UK Sports & Campus Marketing) asked me to help bring Cats games to our Big Blue Nation family over those very same airwaves, it was a no-brainer. I came to Lexington in 1986 as a long and skinny kid with a mullet – as excited as could be for the opportunity. In 2016 – as an old bald dude – I’m even more pumped for this opportunity. And I’m certainly more grateful and appreciative.”

“There’s no one that I’d rather see in that position than Rex,” UK head coach John Calipari said. “He’s an icon in this program and in this state and is well-deserving of this opportunity. I couldn’t be happier for him and for us. This is what families do.”

Chapman was a prolific scorer during his two seasons as a Wildcat (1987-88). King Rex, as the fans liked to call him, scored 1,073 points in his two years in his college career, including 609 during his sophomore year, tied for third most in school history among sophomore players.

A native of Owensboro, Kentucky, and the 1986 Mr. Basketball winner, Chapman joined the Wildcats for the 1986-87 season among considerable fanfare and expectations, which he lived up to. In his first season at UK he was named to the All-Southeastern Conference First Team by the league’s coaches and to the All-SEC Second Team by the Associated Press and United Press International.

The following season, his sophomore year, he was named a third-team All-American by both the National Association of Basketball Coaches and Basketball Times, in addition to making the All-SEC First Team (coaches, AP and UPI).

A member of the UK Athletics Hall of Fame, Chapman was drafted No. 8 overall in the 1988 NBA Draft by the Charlotte Hornets. Chapman played 12 seasons in the NBA where he averaged 14.6 points per game, including a career-high 18.2 during the 1993-94 season. He represented UK on Team USA in the 1987 Pan American Games and was also named to the NBA All-Rookie Second Team in 1989.

Fans can participate in the “Texas Roadhouse Countdown to Tipoff” show via the Kennedy’s Wildcat Den hotline at (800) 606-GAME or in the local Lexington area at (859) 280-2287, or via Twitter at @UKRadioNetwork.

The show is broadcast in Lexington on WLAP 630AM and WBUL 98.1FM, across the state on UK Radio Network local affiliates, online at UKathletics.com and through the official UK Gameday App.

“I’ve known Tom, Mike and Buzz for some 30 years and couldn’t be more excited to now be working alongside them,” Chapman said. “From Joe B. (Hall) to Cal and from The Big Horse Dan Issel to Big Bam Adebayo, I can’t wait to share UK friendships, experiences and stories from the past four decades.”

“We are thrilled to have Rex join the UK Sports Network family,” Archey said. “His passion for the program, appreciation of UK’s storied basketball history, and his affection for the Big Blue Nation makes him a perfect fit for the network. Rex’s status as a Kentucky Basketball legend combined with his NBA experience on and off the court allows him to bring a unique perspective to the broadcast, linking the past with the present. He and Dave Baker will make a great team.”

Additional quotes from Rex Chapman:
“Mr. Bill (Keightley) grabbed me on my visit to UK in 1985 and said, ‘Rex, whether student/athletes leave here and go on to play pro ball or not – we take care of our guys at Kentucky.’ Truer words were never spoken.”

“My grandparents and Coach Hall were the best of friends when I was a little kid. I’ve been fortunate to witness this program’s greatness and durability from Joe B. in the mid-70s through Coach Cal today. What Cal has done and continues to do on this stage is mind-blowing. Simply, he’s killing it. I’m humbled and thrilled to help bring BBN the excitement surrounding this young and talented Cats squad.”