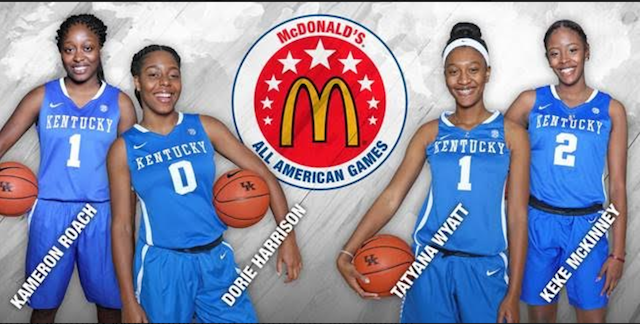 The annual McDonald’s All-American Game will take place March 29 in Chicago. Official team rosters have yet to be selected. Harrison, McKinney, Roach, Wyatt and junior college transfer Amanda Paschal make up UK’s 2017 signing class, which ranks No. 17 in the nation according to All-Star Girls Report.


Harrison is the 14th-best post in the class by ESPN.come while All-Star Girls Report tabbed her as the 78th-best player overall in 2017. Harrison, who averaged 15 points, 11 rebounds, two blocks and one steal per game her sophomore season at Hillsboro High School in Nashville, Tenn., missed her junior season due to injury. So far this season, Harrison is back to her dominating form, averaging over 12 points with 9.5 rebounds per game. After her strong sophomore season, Harrison was named to the Metro Nashville Basketball Coaches Association Class AAA All-Metro Team and Class AAA All-District Team.

McKinney is an impressive wing prospect that averaged 18 points, 11 rebounds, three assists and three blocks per game last season at Fulton High School in Knoxville, Tenn. Her strong junior season led Fulton High School to the Class AA state sectional for the third consecutive season, while McKinney was named the District 3 AA Co-Most Valuable Player and a Class AA All-State honoree by the Tennessee Sports Writers Association. McKinney is rated the 59th overall player in the 2017 class by ASGR, including the 17th best wing by ESPN.com.

A physical guard from Hopkins, S.C., Roach is ranked as the 70th-best player in the 2-017 class by ASGR. Roach, who participated in the 2016 USA Basketball Women’s U17 World Championship Team Trials, averaged over 10 points with 2.2 rebounds, 2.9 assists, and 2.9 steals per game as a junior, helping Lower Richland High School to the state playoffs where she scored 16 points in the team’s first-round win. Roach has been a four-year starter in high school and averaged 11.5 points, 2.2 rebounds, 3.7 assists and 2.1 steals per game as a sophomore, earning South Carolina Basketball Coaches Association All-State and All-Region honors. Roach also hit 41% from the field as a sophomore and 45% from the field as a junior.

Wyatt is an all-around athlete that is ranked as the 92nd-best player in this class according to ASGR. Last season, Wyatt helped Columbus High School make the state quarterfinals, averaging over 20 points per game with 8.9 rebounds, 1.7 steals and 1.3 blocks per game, hitting an impressive 49 percent from the field. Her strong junior season led her to Georgia Sportswriters Association Class AAAAA Second-Team All-State honors. As a sophomore, she hit 48% from the field, averaging 18.8 points, 6.3 rebounds, 1.8 steals and 2.3 blocks. Wyatt was a key player on Columbus High School’s state runner-up team as a freshman, averaging 11.2 points, 4.5 rebounds and 1.0 blocks per game. Wyatt was also a star on Columbus High School’s volleyball team, totaling over 1,000 career kills and leading the team to a state championship title her junior year, state runner-up title her sophomore season and a state semifinal appearance her senior season.