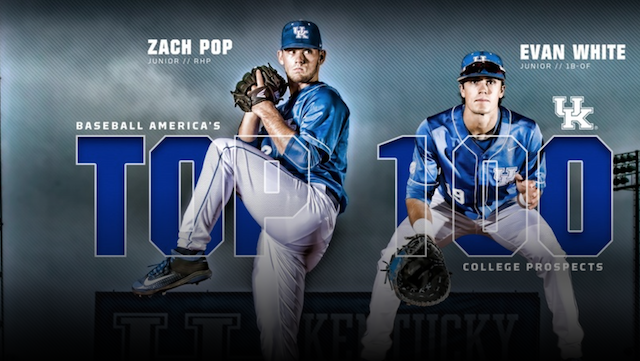 White checked in at No. 33 on the preseason list, while Pop ranked No. 74.

White, a junior from Gahanna, Ohio, is coming off a stellar 2016 season where he earned Second Team All-Southeastern Conference honors. The 6-foot-3, 195-pounder’s defensive prowess earned him a Rawlings Gold Glove in 2016 and All-SEC Defensive Team honors for the second consecutive season. As a freshman in 2015, White earned Freshman All-SEC honors.

Pop, a junior from Brampton, Ontario, Canada, features a dominating fastball that regularly reaches the mid-to-upper 90s and has garnered the attention of professional scouts since his arrival in Lexington. The 6-foot-4, 225-pounder appeared in 19 games with six starts in 2016, posting a 5.21 earned run average and striking out 24 in 38 innings pitched. He pitched well in the prestigious Cape Cod League last summer, striking out at least three batters in six of his nine appearances.

In 2016, UK pitchers Kyle Cody (No. 30) and Zack Brown (No. 35) made the Baseball America preseason college prospects list. Both would go on to be drafted last summer, Brown by the Milwaukee Brewers in the fifth round (No. 141 overall) and Cody by the Texas Rangers in the sixth round (No. 189 overall).