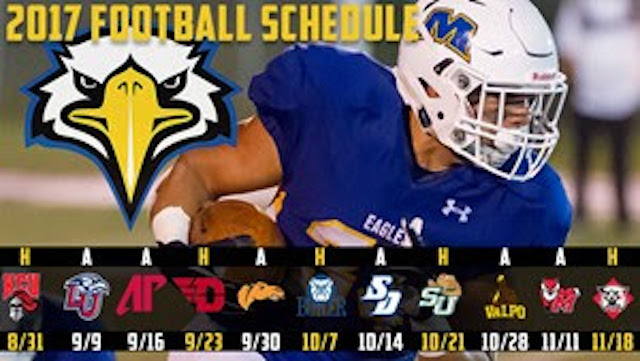 MSU opens the season at home against Kentucky Christian on Thursday, Aug. 31. After an off Saturday on Sept. 2, the Eagles will travel the following week to face Big South Conference foe Liberty on Sept. 9.


“The 2017 schedule includes a new opponent in Liberty and a newer opponent in Austin Peay, both of which will be on the road,” said head coach Rob Tenyer. “We only have five home games, but there are no back-to-back road games all year. I really like the schedule, I believe it’s set up for an opportunity to have a great season.”

Morehead State has not played Austin Peay since 2006 when the two were in the Pioneer Football League together. The Eagles and Governors, who square off in Tennessee on Sept. 16, also played for several seasons in the OVC together.

Game times, ticket information and promotions will be announced at a later date on MSUEagles.com.

Morehead State finished the 2016 season 4-7 overall and 3-5 in the PFL. Eleven players were named All-PFL, and four of those are expected to return for 2017.