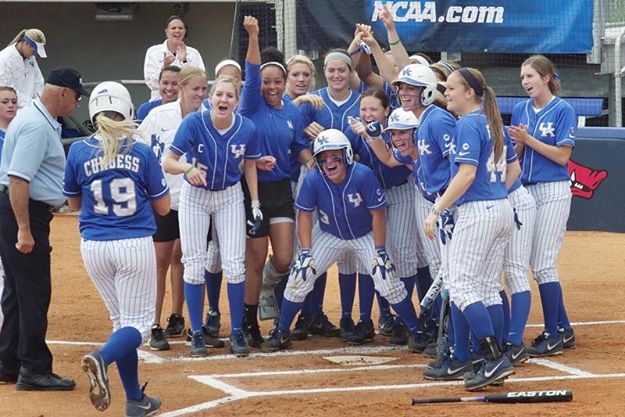 LOS ANGELES – Sophomore catcher Jenny Schaper hit her third home run of the season in the top of the 11th inning on Wednesday night and senior pitcher Meagan Prince went a career-high 11 innings allowing just one run as the No. 22 Kentucky softball team earned a key road win at No. 5 UCLA as part of a doubleheader.

The win for Kentucky is its first road win against at top-five team since the Wildcats beat No. 4 Alabama in Tuscaloosa, Alabama last season when UK beat the Crimson Tide, 3-2 on April 22. With Wednesday’s split in the two games played – the Wildcats stay one game over .500 on the season at 4-1. The loss was UCLA’s first of the season as they move to 7-1.

Prince was solid in the circle all game long, allowing just one run – which was not earned – on over 130 pitches, retiring 35 of the 44 batters that she faced in the 11-inning affair. The Martin, Tennessee native struck out six batters and walked just three.

Wednesday’s doubleheader was played due to the threat of inclement weather over the weekend in Palm Springs, California at the Mary Nutter Classic. Because the two teams played two games today, there will be no game between the Wildcats and the Bruins this weekend. UK will now play just three games this weekend – Friday against UC-Davis and Oregon – and Saturday night against Cal State Northridge.

Key Play
With two outs and the winning run on second in the bottom of the seventh inning – Brooklin Hinz threw out the potential game-winning run from left field on a single to the left side – to extend the game and push it into extra innings.

Key Player
Jenny Schaper was the key player in the game – tattooing a ball over the wall in deep center field and out of the facility. It was Schaper’s third home run of the season and her third RBI of the year.

Run Recap
Kentucky struck first in the third inning after a Brooklin Hinz single began the inning into left field. Katie Reed singled and Alex Martens walked to load the bases with two outs before Abbey Cheek recorded an infield single to score Hinz from third and give UK the 1-0 lead. UK 1, UCLA 0

The Bruins got the run back in the bottom of the fourth inning on a defensive miscue by the Wildcats as a runner scored from third on an infield ground ball. UCLA 1, UK 1

Kentucky sophomore Jenny Schaper unloaded on a pitch to deep left center out of the facility to give UK a 2-1 lead going into the bottom of the 11th. In the bottom of the inning – UK got a rare 6-5-3 double play with runners on first and second with one out to close out the game as Katie Reed started the play with a phenomenal flip to Martens at second and onto first for the game-ending play. FINAL – No. 22 Kentucky 2, No. 5 UCLA 1

GAME ONE – UCLA 6, Kentucky 2
Key Stat
Nine. The Bruins had nine hits in the game – all of them as singles. It was the first time all season that the high-powered UCLA offense was held without an extra-base hit in a game.

Key Play
In a 2-2 game in the bottom of the second, UCLA’s Kylee Perez stepped to the plate with the bases loaded and two outs. Perez roped a single to right to score two runs – which was followed by a throwing error by the Wildcat defense – and gave UCLA a 5-2 lead.

Key Player
The key player in the game for Kentucky was pitcher Erin Rethlake. Entering a 5-2 game – the junior pitcher was phenomenal in four innings of relief work. She allowed just three hits and one run, walking none – and striking out two. Rethlake needed just 46 pitches to get through the final four innings of the game and retired 13 of the 14 batters she faced in the game.

Run Recap
UK started out strong with Katie Reed singling to start the game and then an RBI double to the wall in right center by freshman Alex Martens to put UK up 1-0. After an infield popout – sophomore Abbey Cheek roped a ball through the left side to score Martens and put UK up, 2-0. UK 2, UCLA 0

The Bruins struck for two runs in the bottom of the first inning. The Bruins got three-consecutive singles by Kylee Perez, Bubba Nickles and Rachel Garcia and two runs scored on Garcia’s single to the wall in right. UCLA 2, UK 0

The Bruins took a 5-2 lead, scoring three runs in the bottom of the second inning. After the lead-off batter was retired – UCLA strung together two base hits, a walk and a fielder’s choice to load the bases with two outs. Perez then stepped up and roped a two-RBI single to right and a third run scored on a UK throwing error. UCLA 5, UK 2

The final run in the game was scored in the bottom of the fourth inning, as the first two batters for the Bruins got aboard with singles to put runners on first and third with nobody out. Perez then knocked in her third RBI of the game with a single up the middle and scored Gabrielle Maurice from third. FINAL – No. 5 UCLA 6, No. 22 Kentucky 2