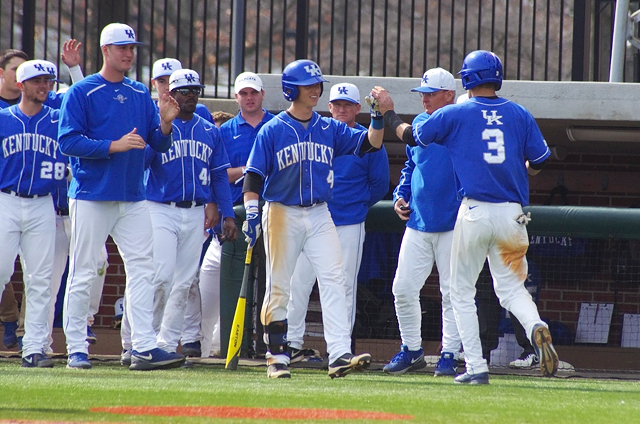 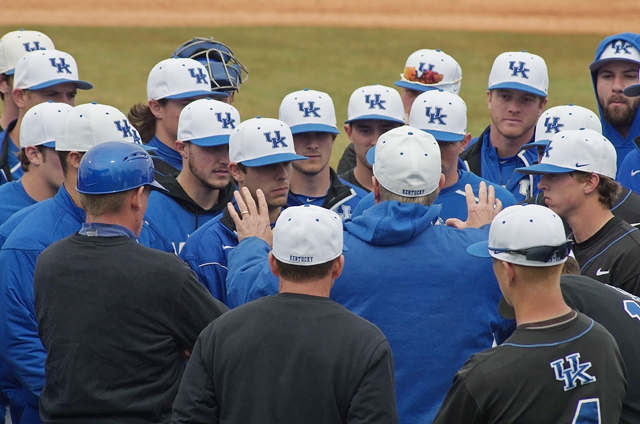 GAINESVILLE, Fla. — Dustin Beggs worked a career-high 8.1 innings and Kentucky got back-to-back home runs from Greg Fettes and Connor Heady in the sixth inning to post a series-clinching 7-6 win at No. 5 Florida, on a humid Saturday night in front of 4,419 at McKethan Stadium.

Kentucky (25-16, 10-9 Southeastern Conference) claimed its third consecutive series win over the Gators, marking a first for the Wildcats since the 1973-75 seasons.

UK posted a 3-0 win over UF in the opener on Friday, the first shutout of the year for the SEC’s leading offense, as UK used a dominating start from Zack Brown. After UK shutout Tennessee in the opener last week, it marked the first time the Wildcats had posted consecutive shutouts to open an SEC series since joining the league in 1937.

A native of Roswell, Ga., Beggs (6-2) worked a career-best 8.1 innings, allowing six hits and three runs, walking two and striking out six. After Beggs getting an out in the ninth, UK turned to Kyle Cody to attempt to get the final two outs, with the Gators getting three runs on two hits and a walk. UK turned to Logan Salow with the bases loaded and two outs in a four-run game. Salow surrendered a pair of hits to put the tying run on third and two outs before standout shortstop Richie Martin game to the plate. Martin attempted to lay down a bunt, with Salow jumping off the mound, fielding the ball in a driving rain, and flipping the ball to Fettes, who applied the tag on Ryan Larson to end the game and clinch the series.

UK collected nine hits in the game, paced by the back-to-back blasts from Fettes and Heady. Heady finished 1-for-3 with two RBI and two runs, with Fettes charting a 2-for-2 game with the homer and a walk. Freshman Evan White extended his hitting streak to nine games with a 2-for-5 game, his seventh consecutive game with two hits. Dorian Hairston added two hits, with JaVon Shelby and Thomas Bernal each charting knocks.

The series will conclude on Sunday at 12:30 p.m. at McKethan Stadium.

UK struck first in the second inning, as Carson led off by reaching on a dropped third strike. Bernal and Fettes were then hit by pitches and Heady forced in a run as the third consecutive hitter plunked by a pitch. With Barrett up, Dunning uncorked a wild pitch to allow Bernal to score, before White spanked a two-RBI double into the left-centerfield gap, giving UK a 4-0 lead.

Florida immediately answered in the bottom of the frame, as Josh Tobias was hit by a 2-2 pitch to load the bases, Harrison Bader singled to left-centerfield on the next pitch and Peter Alonso loaded the bases with a four-pitch walk. After falling behind 3-0, Beggs got JJ Schwarz to hit a deep sacrifice fly to score Tobias and push Bader to third with one out. Mike Rivera followed with a sacrifice fly to right-center, plating Bader.

UK added a run in the seventh, as Hairston singled with one out, stole second base with two outs and scored on Bernal’s RBI double down the line.

The Gators mounted a furious rally in the ninth inning, as Tobias led off with a single and Bader lined out to rightfield. Peter Alonso then doubled to the right-centerfield gap off Cody to score Tobias. Schwarz then ripped a grounder down the leftfield line, with Bernal making a diving play to rob the slugger of extra bases. Rivera then singled and Ryan Larson drew a walk to load the bases and end Cody’s outing. Salow then entered to face left-handed hitting pinch-hitter Jeremy Vasquez, who greeted him with a single up the middle to score two runs. Buddy Reed followed with a single through the left side, taking second as the walk-off run after it was bobbled in leftfield. That brought Martin to the plate with the tying run on third base and the winning run on second. Martin attempted to lay down the bunt, but Salow jumped off the mound to secure the ball and flip it to Fettes for the tag.