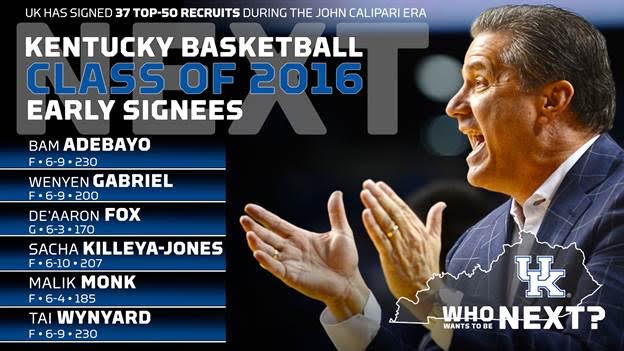 Wynayard has already enrolled at UK for the spring semester.

Here is an excerpt of the press release from UK.

All six players are consensus four- or five-star prospects, and four are ranked in the top 10 by the major national recruiting services. In a class stocked full of highly regarded players, national analysts are already calling this the nation’s top signing haul for 2016.

In every season in the Calipari era, the Wildcats have signed either the nation’s No. 1 or No. 2 recruiting class. UK looks to continue that streak with the latest additions of Adebayo, Fox, Gabriel, Killeya-Jones, Monk and Wynyard.

“Every player in this class is different,” Calipari said. “They all have their own strengths. They all bring something to the table. They’re all different and they’re all concerned with being the best version of themselves. Each kid made a decision based on their goals and dreams and what’s best for them personally. As we bring this all together, I’m excited.”