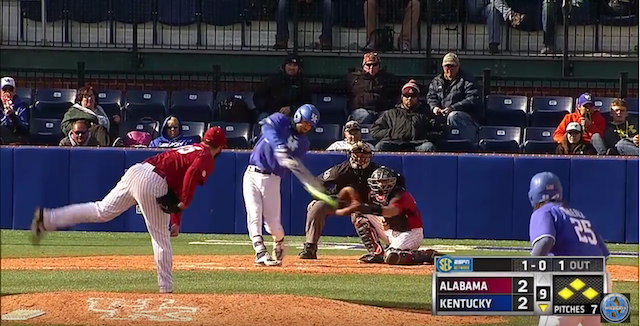 Shortstop Riley Mahan – nursing a bloody nose from a collision on the bases in the early innings – belted a walk-off grand slam in the bottom of the ninth to lift No. 13 Kentucky to a 6-2 win over Alabama to clinch the series, on a cold Saturday afternoon at Cliff Hagan Stadium.

With the bases loaded and one out in the bottom of the ninth inning, Mahan came to the plate for a lefty-lefty matchup vs. Alabama senior Jon Keller. Kentucky had just surrendered its 2-1 lead with a two-out home run from Will Haynie in the top of the ninth inning and after UK loaded the bases with no outs, Keller responded with a strikeout for the first out.